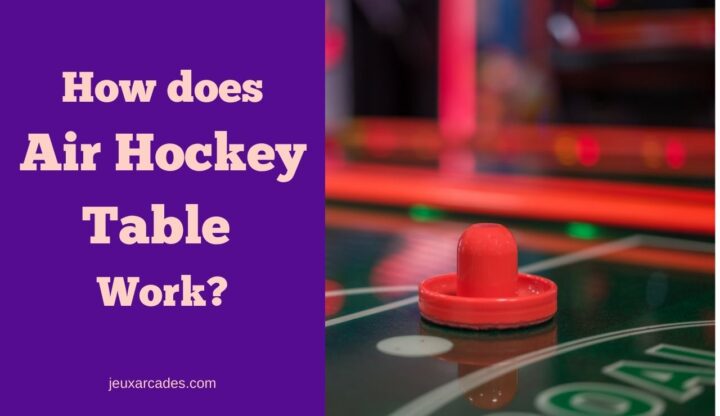 As kids, we were always fascinated by the floating pucks on the boards and questioned how the air hockey table works, including its mechanics and physics. And frankly, its addictive gameplay is the main reason it is famous back in the arcade studio era. People are buying different styles and types of air hockey tables for their homes, workplaces, bars, and even cafes.

Also Read: How to clean an air hockey table

The basic design of gameplay remains the same through the years. Only the outlook and table specs are upgraded accordingly to the modern era. Its simple setup gives floating power to pucks across the slippery smooth surface. The air hockey table was invented by many engineers in the early 1970s, from where its journey started to this day.

They wanted to introduce a game inspired by ice hockey that would be faster and more exciting than any other table game. Now air hockey tables are available in different styles and types with more advanced specs, making them more enjoyable.

Silky and smooth surfaces of air hockey tables are usually made from plastic for a non-friction playing area for smooth gliding of pucks. Now laminated plywood and MDF boards are also being used for a smooth playing area surface, which is more durable and long-lasting.

Raised walls surround the playing area with four corners to prevent the puck from bouncing out of the field.

The surface area of the air hockey table is drilled with tiny holes all over the place to provide a frictionless area.

An air blower fan is installed inside the table beneath the playing area. This blower supplies air through symmetrical, drilled tiny holes throughout the surface. It enables the puck to hover over the playing area like a hovering helicopter.

For air hockey table gameplay to operate correctly, the key principle relies on the effectiveness of a silky smooth surface. And an even flow of air streams through all the tiny holes creating an air cushion for pucks to float around.

Since the air hockey table was built on ice hockey inspiration, the playing area is covered with all the ice hockey markings.

The air streaming and smooth surface create a frictionless surface for a puck to hover on. It enables one player to hit the puck with a striker and glide it toward the second player in an attempt to score a goal. The second player must guard their goal area and score back by sliding the puck to play one position. The winner of the game is the one with the highest score.

The most significant part of the game is the table. The right balance and an even airflow are essential too. Any damage or carelessness could affect the overall performance of any air hockey table. You can encounter the following damages:

The rules and gameplay are pretty simple for an air hockey table, but the techniques and ways you can play it are countless.

Let us begin with the basics. It is a simple straight shot that players make to get the puck from one end to another. This technique is the easiest among other strategies for players to learn and play. Since it is the simplest and easiest one, players always use this technique in a deception form to score a goal. For a straight shot to be effective, it needs to be accurate and fast, a challenging shot to master.

Players can make this shot by hitting the puck at an angle where the puck hit the wall near your goal area to slide at different angles. This bank shot is known as an over-the-bank shot. It will be effective if the shot is made accurately and with good speed, making it difficult for the opponent to hit back.

The second bank shot technique is called under the bank shot, which is the opposite of the first one, where players hit the puck at an angle where the puck hits the wall near the opponent’s goal area. Under the bank shot is a great technique for an offensive game. At the same time, it isn’t easy to put into action.

The first thing that comes to mind is always trying to score a goal first, but any game is played with offense and defense mode. This technique is more of a defense technique where players guard their goal area by placing their striker’s hand in a position that is easy to move in a triangle.

To defend any shot that comes at any different angle, the triangle defense technique is the best one to use against them.

It is a technique used by professionals in tournaments and matches. The player hits the puck at such an angle that it moves and slides onward in a zigzag pattern. Only a pro can tackle this technique and hit back; otherwise, it is a pretty hard technique to master and strike back.

Air hockey table gameplay is quite simple, which is why every single person, despite their age, enjoys playing it so much. The rules and regulations are easy to understand. And hopefully, we managed to keep it like that in our article.

We have covered as much about how an air hockey table works. How the mechanics operate, and the physics behind a hovering puck. Along with some damage to the air hockey table tackle that you might come across. On top of all that information, we loved sharing all the gaming techniques with you. Let us know which method you have mastered below in the comments, or let us share any pro tips you have.

As Amazon Associates, we earn from qualifying purchases.